Backpack turns music into full-body experience for the deaf

Steaklocker Could Let You Dry-Age Delicious Beef Chunks at Home 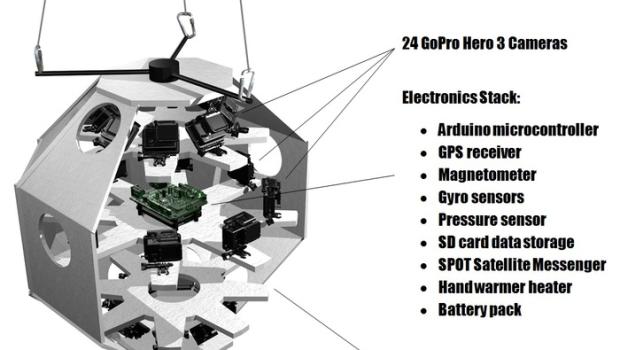 The proposed payload that will travel twice as high as a commercial airliner so you can do the same without ever leaving Earth!

“Only 530 humans have traveled to space. This project isn’t for them. It’s for the rest of us…”

So begins the video presentation for a new Kickstarter campaign that’s seeking funding to create a virtual ride to the highest reaches of our atmosphere. The team of researchers developing the idea is working at Surrey Space Center at England’s University of Surrey. They propose to send a series of 24 GoPro Hero 3 cameras attached to a balloon approximately 12.5 miles into the air. There, the balloon will pop, a parachute will open, and the whole works will drift peacefully back to Earth, filming all the while.

The video footage of the journey will then be stitched into a continuous immersive experience that will be available as software for the Oculus Rift virtual reality headset, complete with its own musical soundtrack (which you can customize using your own MP3 player). The software will allow you to speed up, slow down, and reverse time — all the while looking wherever you want thanks to the magic of the OR headset.

The cameras will be encased in a Styrofoam orb complete with sensors, an SD card to store the video, battery pack and, of course, a hand warmer to keep things toasty in the upper atmosphere, where temperatures average -67°F.

For those who don’t have an Oculus Rift — which, seeing as it’s not yet commercial available, might be a percentage only a little lower than those of us who’ve been to space — the developers plan to have versions of the software available for smartphones and PCs. Smartphone users will be able to look around by tilting their devices, while the experience on PCs will be controlled via mouse, similar to an FPS game, according to the site which adds: “Either way, you’ll be able to look around freely in real time as if you were a virtual passenger riding the balloon to space.”

The bid to get the Oculus Rift software (the Rift itself is yours to try and score) is £50 (about $84). Considering a seat on Richard Branson’s Virgin Galactic trip to space costs $250,000, this might indeed be a more affordable option. But you won’t get those little packets of peanuts.

Here’s a bit more about the project:

Next post The Top 10 Countries by Money Pledged on Kickstarter

Previous post The Components of a Debt Crowdfunding Campaign

About the Author Michael Franco